wherein the Deist and Deistette praise God OR….

So during the four weeks when I was doing the demolition and reconstruction of our kitchen (see post below) I decided since I was in a building kind of mood I would construct a little raised garden bed.  “Little” is the key word here.  It’s only two and a half feet by five and a half feet.

It’s really cool though.  I can hardly believe it. (click the thumbnails to see bigger pics)

Emmie and I have talked about doing one since… well since before we even met.  For a little more than a decade I’ve had the notion of living off the land, raising a few chickens and goats and having a garden that could sustain my family.  Keep in mind I know nothing about country living or farming and ranching but like I said for years I’ve had the desire to do this. I even bought my own little piece of Texas about nine years ago with the hopes of doing it some day.

Emmie told me when we first met online that she has had the dream of being able to have her own vegetable garden for years as well.

Well, she ain’t much but here it is. 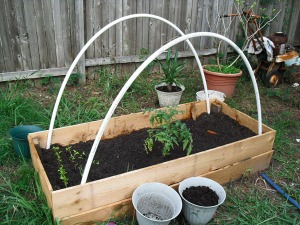 Our little plot of earth that will soon release her bounty.  🙂  And with God’s good grace and laws of physics He has set in place (and hopefully despite my complete lack of knowledge) we will have at least some fresh veggies from our own garden. 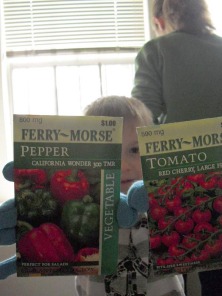 We started by planting seeds back in February.  That may have been a bit early but like I said we don’t really know what we’re doing.  We planted some onions, green pepper, jalapeno pepper, cilantro, roma tomatoes and some flowers. 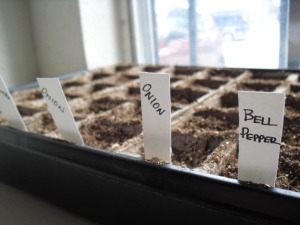 I built the raised bed about two weeks ago and I can hardly believe how all our little seedlings that had been desperately hanging on as well as new seeds planted have taken off.  The tomato plant in the middle we bought for about two and a half bucks was already grown.  I haven’t seen much growth out of it but the zucchini… holy crap!  And the watermelon.  And our little peppers. 😀   I thought we had stunted them but they seem to be having a little growth spurt. 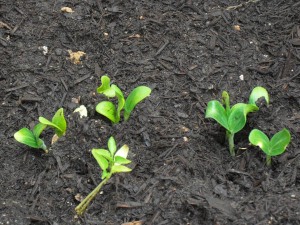 The picture at the very top was taken just after I built it and put our seedlings in.  By the way, if you’re wondering what the roll cage is, it’s PVC pipe put in place to keep varmints out.  We have a lot of stray cats on my street and I wanted to keep them out.

I had a couple of rolls of plastic netting laying around in my garage that I rigged over the pipe.  Anyway the pic to the right is of the zucchini seeds just four days later!

This one below is that same zucchini after two weeks!  Fwahpow!

I am amazed.  Simply amazed that food is growing in my backyard!

ok, on a serious note.  I am really excited and honestly in awe.  I mean… all I did was fill a box up with dirt, put some seeds in the ground and give ’em some water.  Nature’s God did the rest.  I am truly humbled by what is taking place in my backyard.

5 responses to “wherein the Deist and Deistette praise God OR….”