I’m not sure if something is going around or if everyone in my office has a case of the Friday flu but two of my co-workers are out and two others came in late claiming a child was sick. If we had a couple dozen employees it might go unnoticed but when there are only seven of us… well, it raises an eyebrow.

Something is definitely going around though as The Boy woke us up at 3:30 Thursday morning after having barfed his guts up. All morning and into the afternoon he slept in between having it shoot out of both ends of him. I know… probably too much info.

He seemed to get better then he’d barf up again, his fever would raise a half degree or so then he’d sleep. A couple of hours later he would drink just a little then the same series of events would happen.

Finally about 8:00pm or so we decided to take him to the hospital. We worried of appendicitis because his low-grade fever wasn’t really coming down. Well the doc said it was probably viral since he’d had four other kids come in with the same stuff. Something’s probably going around.

He poked around on his belly and didn’t feel like it was appendicitis. So he prescribed fluids.

The Boy immediately started crying because he knew what that meant.

The Deistette had been telling him all day he needed to drink water or she was going to have to take him to the doctor and they would probably have to put a needle in him to give him fluids. Nothing. He wouldn’t drink. I guess he didn’t believe her.

So as the doc said he was worried about him dehydrated and that we just needed to get fluids in him… the alligator tears were rolling.

So the phlebotomist/nurse comes back and is talking very gently to The Boy. He was seasoned enough to know he needed to handle him with kid gloves but even bringing in a pretty co-worker with a soothing voice didn’t quite work to keep the anxiety away. Just cleaning his arm brought out screams. And when it came down to finally putting in the IV needle, they both had to hold his arm steady and I had the miserable job of pinning his chest down, trying to keep his face turned away from his arm and take the brunt of his tortuous screams straight into my ear.

A few seconds of pain and the screaming stopped but he was still crying a little. Some tape to keep it in place and the deed was done.  We promised not tell his little girlfriend that he was screaming like her little sister when he got stuck. : )  Instead, proof of having a giant needle the size of a bathtub stuck inside his arm to show off.

Oh… i almost forgot. THANK YOU so much to the staff at St Christus.  They are all so, so awesome! 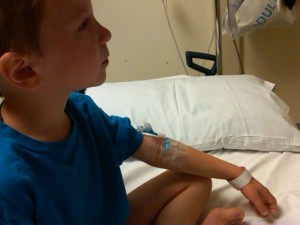 This entry was posted in health, hospital visit, life, personal. Bookmark the permalink.

One response to “Battle scars”