coppin’ a feel in old age

A few days ago after my wife woke up I said to her, “i think my body produces some sort of viagra-like substance from about 5:30 to 6:30 in the morning. See?”

“Annnnd… get ready for work and put the boy on the bus.”

I chase my wife around the house quite often. Occasionally I catch her. So despite being in my mid-40s, I am so not in the target market for the commercials for cialis that state, “so you can be ready.” or something to that effect.

I suspect it will happen eventually. Who knows.

Sex aside… I hope that The Deistette and I are like these two folks here in 20 years. I cried with laughter at watching this vid but analyzing it and their behavior a little deeper than the surface shows a couple that is so comfortable with each other it incites hope for long-term marriage.

It does in me anyway… as well as hope for continued peeks at boobies.
Burp! excuse me.

this quote reminds me of The Deistette

I stumbled over this quote by Kahlil Gibran from his book, The Prophet.  I love that book and haven’t thought of this quote in some time.

In the sweetness of friendship let there be laughter, and sharing of pleasures. For in the dew of little things the heart finds its morning and is refreshed.

Emmie and I have been married a year today.  It’s been hard. But we’re still chugging away.  I find our best times, our funnest times are when we are by ourselves… no kids, no chores, no obligations… just us being friends.

Those times are very few and very far between.  But even during the mundane, the every day, with the burdens, the stress and tension of life… tension of each other…  we manage to brush off that stuff (might take a week or so but it gets brushed off) and laugh with each other and share pleasure.

We went on a date in early October of ’09.  That was five months ago.  I think the last date we had before that was in June of that year… maybe… I think.

I love being married to her.  She is an amazing, beautiful, kind woman and wife.

I wish we had dated more though.

Love you Emmie.  Happy Anniversary.
The Deist and Deistette on a date Oct 2009 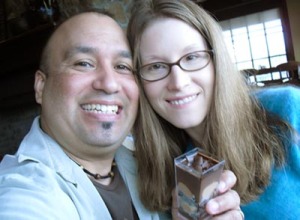 me and the little man

A couple of posts ago I talked about how The Deistette‘s Little Man had the crud and I was the one who stayed home with him.

Well since The Deistette found a job just a few weeks ago, I’ve been (not completely) but for the most part, in charge of getting him out of bed and getting him ready to go to pre-school.

Getting breakfast. Trying to explain why the child can’t wear his bathing suit trunks, cowboy boots and a wife beater undershirt. Giving medicine for the cold contracted from being at the pre-school. Cleaning the child off because he spilled medicine down his chin and neck. Giving medicine again.

I’m sure you get the idea. Every little movement… every little instance in trying to get ready is an extremely complex evolution that requires tremendous forethought and logistics.

So the reason for the forethought and logistics is because he has to be somewhere while The Deistette and I are at work.

So Emmie found a great little school for him to go to but the problem is it’s so far away. We figure, “hey it’s pretty cheap. We can do this.” Turns out to be a fantastic school and really helps The Little Man catch up on where he should be with writing his name and letters and other pre-schooley things.

Well, we couldn’t do it. Turns out it wasn’t as cheap as we thought. The drive was killing both me and the boy and ultimately we had to change him to another place closer to our house.

It sucks. To put him in one we can afford means putting him in a sub-par facility. Don’t get me wrong we didn’t put him in a dungeon. It just isn’t the same as when he had a teacher that really worked with him.

I hate it. I feel responsible. If I could have just woken up earlier. Woken him up earlier. Discovered clever ways to make him have a “good” morning vice the screaming, crying, “i-don’t-want-to-go-to-school” mornings. Found a way to afford it. It just sucks.

The Little Man looks up to me. He really likes me and he often says, “hold my hand Julian” when we go to the store or when I’m walking him to his little pre-school, which is a pretty friggin’ cool feeling. But taking his hand comes with a tremendous amount of responsibility that I’m not sure I’m up to.

I’ve never thought as myself as a very good dad. Pretty sure I wasn’t the best dad to Little Fawn I could have been. The Little Man’s daddy lives up in the panhandle right now and because I’ve chosen to be with his mommy, I’ve got to step up and fill those shoes.

Hope I don’t let him or his mommy down.

The Little Man and The Deist

well, we didn’t kill each other

In my previous post I talked about how my little Deistette was coming down to H-town from up in the panhandle to visit me. It was nice. It was a really nice visit as we got to learn more about each other.

There was lots of saying “oh… sorry” as we maneuvered around each other. There were quite a few moments when I thought, “huh… i didn’t know that about her.” And it was an unusual but familiar experience (I’m referring to having been married before) to have the place where I occupy space double in its population.

The best thing about it all is she misses me and i miss her and that she’s coming back soon.

I think it’s a good sign this little dog is gonna get adopted.

Imagine a little dog that has been chasing the bumper of passing cars. There’s a really cool, beautiful, sleek, shiny one he’s only dreamed of being able to touch if even for just a second, let alone hold on to it for any length of time.

One day, that car stops on his street.

The driver gets out and calls for him to come over. END_OF_DOCUMENT_TOKEN_TO_BE_REPLACED

So a few posts ago I mentioned that I met someone. Lazy Buddhist made a comment saying something to the effect of “… well, whoever she is, she is a very lucky girl to have met you.” Thanks LB… it’s really, really sweet of you to say.

Soooo… with that comment in mind, I thought I would tell you a little bit about who she is.

I found her through yet another attempt at a dating website. And despite her profile saying she is 27 (ouch…), with two young sons (double ouch), a Christian (ouch!… like being kicked in the ding ding) and living in a small town on the other side of the state, I thought what the hell, I’ll write to her just to see.

Well, she wrote back! And in the almost month that we’ve been e-mailing, texting, sending pictures and talking on the phone I’ve gotten to know a lot about her.

Physically, she isn’t quite the type of woman I would normally date. Not that I’m not attracted to her physically, because I am very much so, it’s just, only on a couple of occasions have I ever dated a girl who is so…

END_OF_DOCUMENT_TOKEN_TO_BE_REPLACED

as one dies another is born

When I was in high school i had quite a few friends, mostly because I was in the band, and that time in my life holds fond memories for me. I’m fortunate in that regard because I know a lot of people whose high school memories are ones of angst, dislike mixed with feelings of inferiority and inability to fit in.

But being a band geek, i had a tribe of accepting friends who never made me feel like the dork I really was…. perhaps “still am” is more accurate.

But there were four girls who were not in the band that I also ran around with and they accepted me into their little circle. One overweight, rather bubbly and quasi popular girl…Lisa T. One very overweight, very bubbly and not so popular girl… Dena. One very tall (six feet) lanky diamond in the rough drill team member… Lisa L. and another drill team member Phyliss, who had moderate success breaking into the popular crowd until she moved away our junior year. END_OF_DOCUMENT_TOKEN_TO_BE_REPLACED

Nothing like a good consentual groping and make out session to make a guy feel like he’s back in the game.

oh wait… maybe this. kinda reminded me of this song.

Of all we can offer a rogue kiss, tangled tongues and lips

the phenomenon of proximity

I took a social psych class when I was in school and i remember a lecture where the instructor asked the class (those who were married, engaged, or had ever been in a serious relationship) to think about how they met. He waited a few seconds to let that sink in and he began to explain about percentages, statistics and equations that showed a direct link to relationships and the physical proximity of the participants of said relationship when the opportunity for the relationship to begin occurred.

ok, I can’t remember exactly what he said but it was something like that. Basically, he was saying the possibility for a relationship to begin END_OF_DOCUMENT_TOKEN_TO_BE_REPLACED

an update on The Amazon

I’ve been meaning to post something about this for a little while since Jo and LB said they wanted details on what happens as I dive into the fray of the dating pool.

About a week ago (the day before Valentine’s Day) Good Morning America did a report on eHarmony. Here’s how the story intros:

eHarmony has about 19 million single members looking for love, and a national Harris poll found eHarmony’s site is responsible for about 44,000 weddings a year and more than 100,000 babies born so far from the site’s cybermatchmaking.